Being so removed from the time and without reference to the myriad sutras that record it, it is hard to imagine how beautiful, harmonious and excellent was the Sangha led by Lord Buddha 2633 years ago. His Sangha was joined by renunciates from every strata of the Indian Society- nobles of royal families, untouchables, mothers,

musicians and notorious murderers. All had the chance to meet a truly exceptional being, Buddha Shakyamuni, to whom even the descriptor of being does not apply. Born from his mothers side and walking seven steps in each of the four cardinal directions at his birth the boy Siddhartha who was to become a Buddha was truly exceptional.

His students, once they decided on the path of Dharma, were welcomed into the community of those practicing to eliminate all obscurations, or in other words, personal negativites. In Tibet the stories of their lives was Legend. 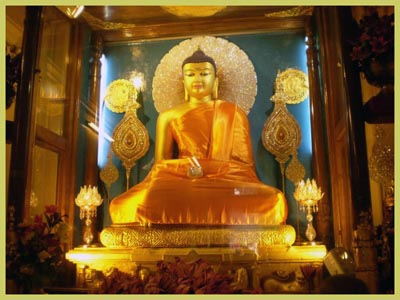 The Buddhist Sangha was driven by one goal, eventual enlightenment. Enlightenment was taken seriously in those days, it was the ultimate goal that drove the breath of those on the spiritual path. Living in the princely house of his father in the Kingdom of Shakya, the prince Siddhartha, after encountering the sight of the four major sufferings common to all humans,

when he reached the age of twenty-nine was inspired by this very thought of enlightenment, spoken of with awe in quiet rooms or besides fires at night in India almost three millennia ago, in short he was driven by this thought, in sanskrit called Bodhicitta – the eventual Enlightenment of all Beings.

Siddhartha forsook everything that was holding him back to seek and attain this goal. At the age of thirty-five, he was victorious, fully enlightened under the Bodhi-Tree in Bodhgaya, defeating a host of demons, he realized the truth of all things.

That is what enlightenment is, the truth, the true nature of phenomena which we now see incorrectly due to our negative thinking, in the Buddhist paradigm known as the two obscurations. The teaching “The Twelve Deeds of a Buddha” describes 12 acts every Buddha preforms. Following his enlightenment Lord Buddha taught 84,000 paths of removing forever that which was obscuring beings.

The paths Buddha laid out originated from his enlightenment and so unmistakably lead to this goal. Siddhartha became enlightened and therefore became a Buddha, an awakened one, which is exactly down to the last hair-breadth equivalent to enlightenment itself. If we seek the same goal and follow Buddha as the teacher walking the path he laid out we can be enlightened also. The original disciples came from all walks of life and as one great body of peace won the hearts of and were an inspiration too the whole of Northern India. They offered a society for anyone determined to join in which all conditions were optimized to reach the end of the spiritual path.

Buddhas first teaching was the four noble truths, which is based on the crucial insight that all phenomena are a creation of thinking, from positive mindstates happiness arises and from negative suffering does. It is crucial to understand that phenomena are not informed from some other principle other than thinking, such as the universe or atoms, or energy. They are manifestations of deluded thinking.

the path or Dharma and its myriad ways of removing obscurations and increasing positive thinking in order attain the state of enlightenment itself. Striving for Enlightenment is what it means to be Buddhist and the texts we will study during this Shedra outline powerful and swift methods to reach this goal.