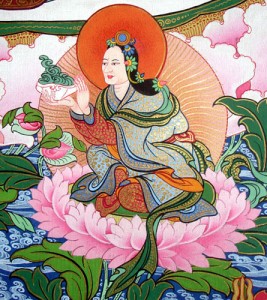 I with profound respect and deep reverence, bow and take shelter at the holy lotus feet of the glorious Guru Padmasambhava, embodiment of the Buddhas of all the ten directions, past, present and future. We seek the blessings for all the beings to be his devoted disciples for their life until they attain enlightenment.
As said by Kybje Dilgo Khyentse Rinpoche,’that though there have been many great divine personalities in the sacred lands of India and Tibet, none can be compared as embodiments of compassion and blessings as emanate from Guru Padmasambhava’. In general, Buddhist teachings are divided into four levels. The omniscient Buddha discerned that sentient beings have varying capabilities of attaining enlightenment, he therefore provided different levels of teachings and methods that are appropriate to each level.

The Nyingma school of Tibetan Buddhism is ancient.

It was established in Tibet, the land of snow, by Guru Padmasambhava, Khenpo Bodhisattva and the Dharma King Trisong Deutsen, who are considered to be the Great Three and also known as the glorious Regents of Buddha Shakyamuni. In their presence the Enlightened Masters and Lotsawas (translators),

who were none another than the emanations of Buddhas and Bodhisattvas, established the Buddha Dharma in the traditions of the Sutrayana and Mantrayana in Tibet, which formed the well laid foundation of Nyingma Tradition of Tibetan Buddhism.

They caused it spread with deep roots throughout the snowy land and over all these years spread in all the nooks and corners of the world.

During this era of prolific dharmic activity of the Khen-Lop-Cho (Bodhisatva-Guru Padmasambhava- King Trisong Deutsen) the Tripitaka Sutras and the Mantrayana Tantric treatises along with their various commentaries were translated from Sanskrit into Tibetan language in entirety. This collection is considered to be one of the most valuable treasures for the humanity.
Tibetan Buddhism is mostly the Vajrayana linage.

The first Vajrayana was called Enlightenment Lineage of the Nyingma because it was a manifestation of the Buddha and Bodhisattvas. This lineage unifies Vajrayana and Mahayana. Practicing and realization are at the core of this devotional lineage without intellectual.

In the Nyingma lineage there are most important six principles monasteries, one of these is Shechen.We Welcoming Buddhists, are under its direction.

Kybje Dilgo Khyentse Rinpoche revealed many important terms that had been hidden by Guru Rinpoche.

This new treasure lineage, reintroduced by Khyentse Rinpoche, enables one to practice well and to became enlightened in one lifetime. Like a wish fulfilling tree, we share these precious teachings with all beings.

Rigdzin Jigme Lingpa would always spend the time of the constellation Risi, in autumn, at a certain hot spring. The sides of the pool had no steps, making it very difficulty for him to climb down to the water and sit in it. His followers offered to cut some steps, but he replied: “Why take so much trouble when we don’t know if we will be around next year?” He would always be speaking of impermanence like that, my Master told me.

We too, as long as we have not fully assimilated such an attitude, should mediate on it. Start by generating bodhicitta, and as the main practice train you mind by all these various means until impermanence really permeates your every thought. Finally, conclude by sealing the practice with the dedication of merit. Practicing in this way, strive to the best of your ability to emulate the great beings of the past.

Impermanence is everywhere, yet I still think things will last.
I have reached the gates of old age, yet I still pretend I am young.
Bless me and misguided beings like me,
That we may truly understand impermanence.