According to the Nyingma Lineage, brought to Tibet in the 8th Century C.E. The entire corpus of Buddha’s teachings can be classified into a system of nine yanas, vehicles. They are Hinayana, Pratyekayana, Mahayana, Kriayoga, Upayoga and Yogatantra, Mahayoga,

Anuyoga and Atiyoga. Within these 9 vehicles are contained countless teachings and even within Tibetan Buddhism itself there are four schools of teaching each of which has varies on areas most emphasised. Each of the nine yanas provides an explanation of the absolute according to its level, or- view and its teaching is tailored to the capacity of the beings to be trained according to whatever level is appropriate. The Dudjom Tersar Ngondro lays the foundation for the practice of the three upper Tantras, though in itself it includes all nine. 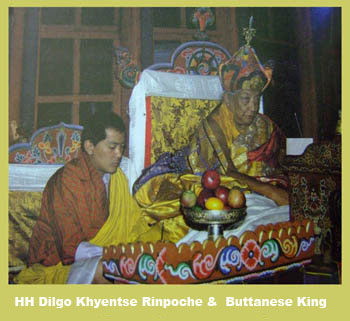 In Buddhist and especially Vajrayana meditation, one must lay the foundation. If the foundation is strong then the higher level practices will be stable and will then truly be high level practices leading to swift realization. When we practice Dharma we should practice with confidence in and the wish for results.

Without completing Ngondro, results will be unattainable, whether they be the results meant as indicators of progress or the supreme attainment of enlightenment. It is therefore crucial that we practice and integrate with our minds the Ngondro teaching, realizing its facets so that we’ll not end our efforts with a fruitless Dharma practice.

It is because they wished for their students to derive benefits from the Dharma that the Great past masters established a pedagogy of teachings to guide each student who was to encounter the Buddha, Dharma and Sangha according to that students capacity.

In the teaching of Ngondro, all Nine Yanas are included within a single Sadhana practice and by realizing Ngondro’s meaning we will see all the teachings clearly. Hinayana is contained in the four thoughts which turn the mind from samsara, teachings common to all forms of Buddhism. Here the focus is on Renunciation from which faith is generated and refuge in the Buddha,

Dharma and Sangha is taken as way to be free from the sufferings of samsara. Mahayana which also recognizes suffering is included in the Bodhicitta vow, Bodhicitta being the root of the Mahayana. These first 8 elements are known as the common practices.

Vajrayana methods are included in the Mandala Offering, Vajrasattva Mantra for purification by means of the four powers, Guru Yoga, Phowa and Cho. These are the uncommon practices and are ways to actualize enlightenment and are of a deeper meaning that we will be able to delve into over the course of the Shedra.
Buddha’s teachings are immense and it is only because of Padmasambhava’s great kindness to us that we have them condensed as the Ngondro teachings,

teachings that a human being even in this degenerate era can surely put into practice. If we were to attempt to master the immeasurable texts of the Buddhist Canon we would not complete the project even if we were to have five-hundred years available. However the instructions that points us towards the realization of the Buddha can be detailed or concise.

The handful of elements that comprise the Ngondro teachings are a 100% complete teaching and mastering them is equivalent to mastering the full range of the 9 yanas. Traditionally in Tibet each element has been practiced as an accumulation of 100,000. If you lack the time for this, Ngondro can be your life’s practice and can still lead to enlightenment.

Again, the metaphor for this process is that of laying a foundation. Those without a good foundation will yield no result from their efforts at Dharma practice in the Vajrayana and this may lead them to criticize the Dharma, However the fault is not with the Dharma but rather with the faulty practice of these precious teachings.

The thirteen elements of the Ngongro will form the basis on which a Tantric Practitioner will master the main, perfection and great perfection phases of the Nyingthig lineage. Practicing these phases out of context is like building a nine-story building on a frozen lake in winter only to have the foundation of ice melt away beneath the building at the arrival of springtime.

The goal of Buddha’s path is enlightenment however “When Dharma is not practiced according to Dharma, even Dharma is a cause of lower rebirths.” All these considerations are only meant to impress how vital Ngondro practice is to attainment in Vajrayana and why we will focus on the Ngondro teachings during this Shedra. Assisting students in their effort to secure the teaching deeply in their minds, understanding all that they need to make progress and one day become Buddha’s themselves, truly able to benefit all who they happen to meet.