During the Buddha’s lifetime the vehicles of Hinayana and Mahayana were taught to large numbers of disciples. The Vajrayana however remained a closely gaurded secret and was taught only to select disciples whose aptitudes were suitable to the Vajrayanateaching. Tantra utilizes a vast array of techniques to actualize the enlightenment that lives as our nature. These teachings are very important, very special, very secret, very deep and powerful teachings. 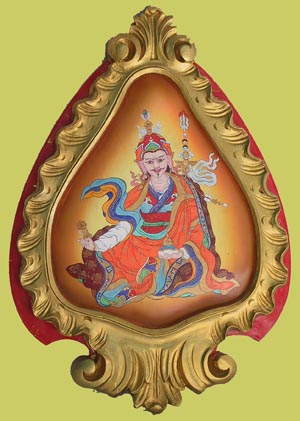 One of the first students of Vajrayana was King Indrabhuti who asked how he could practice the Dharma and remain in his palace. In response the Buddha instantly opened the Guhyasamaja Mandala and granted the king Vajrayana teaching and empowerment.

Buddha’s time was known as a golden age because people did not have the serious,

deep negative karma and obscurations so common today as the age has degenerated. Because of this, during the Golden Age teachings of the Sutra were effective and sufficient for most. Therefore Tantra was taught secretly in small groups and Sutra’s taught in public and monasteries throughout India.

The reasoning behind such a tradition was this- when children are very young they cannot eat solid foods and must be slowly introduced to them as their capacity to take in greater variety of nourishment increases. Just the same, once a being has developed the capacity for a specific teaching whether Hinayana, Mahayana or Vajrayana,

the Buddhas bestow the appropriate teaching.

During his 45 years of teaching, Buddha made several prophesies of times far in the future when the Vajrayana teachings would be propagated on a wide scale as these would be the most effective methods for a time when negative mindstates are a rampant epidemic. He also prophesied his own rebirth as Padmasambhava, Guru Rinpoche.

Guru Rinpoche was born from a lotus upon Lake Oddiyana, mastered the stages and paths and taught throughout India thereafter spreading Tantra in Tibet and to this day many practitioners of Tantra are yielding results and attainment from its practice. see (Past Lineage Masters)

Vajrayana has many benefits as well as dangers. The benefits come from the swiftness and power of the methods and the dangers can be compared to piloting and airplane which allows you to travel much faster;
however, should something go wrong in the flight, the flight will end with a disastrous plane crash. This is why the foundational practices of Ngondro are so critical, as they prepare the ground from which Tantra is to be practiced and ensure the stability of the later phases.

What we wish to accomplish in this Shedra is to provide students with the gateway to the swift path so they will be prepared to practice Tantra successfully should it harmonize with their aptitudes.