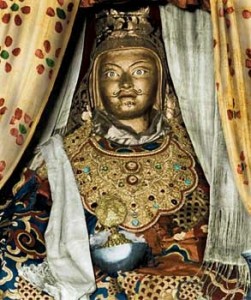 The School of the Ancient Ones of Vajrayana Buddhism
Namo Guru Dewa Dakiniya
Clique aqui para Linhagem Nyingma en Portugese
Tibetan Text
I would like to explain briefly the Buddhist Lineage of the Nyingma teachings. Some elements of Buddhist philosophy and practice purportedly reached remote Tibet as early as the fifth century. However, the major advent of Buddhism occurred in the eighth century,

when King Trisong Detsen (b. 742) invited the Indian abbot Shantarakshita to Tibet, and, soon afterwards, the incomparable tantric master Padmasambhava. As recorded in the Sutra of Final Nirvana and in other prophecies, Buddha Shakyamuni said, shortly before passing into Nirvana, that since he had been born as a human being, in this life,

he had not taught extensively the esoteric teachings of the tantras. He predicted that he would return to this world after twelve years by means of a miraculous birth, in order to expound the tantric teachings.
This rebirth was Guru Padmasambhava, who emanated from the heart of Buddha Amitabha and miraculously appeared in the form of an eight-year-old child upon a lotus, at Danakosha Lake in Uddiyana.

Proclaimed as King Indrabodhi’s, the Lotus Born realized that by following in the king’s footsteps and ruling the kingdom of Uddiyana, he would not benefit beings. He decided to perform some outrageous acts to reduce the attachment the king and ministers had for him and was sentenced to exile. He went to the eight great charnel grounds of India,

where he engaged in yogic practices. Knowing that to benefit ordinary people he had to display the outer behaviors of following the normal steps of the spiritual path of study and practice. He received empowerment from the Dakini Lekyi Wangmo and went to meet the Eight Awareness Holders,

or Vidhyadharas, from whom he received the transmission on the Eight Herukas and the teachings of the Great Perfection. Following this, he converted the kingdom of Zahor, took princess Mandarava as his spiritual consort and attained the Siddhi of Eternal Life at Maratika Cave. Having then converted the kingdom of Uddiyana and defeated the heretic teachers at Vajrasana, in India,

he attained the supreme realization at Asura Cave in Nepal. On his way to Tibet, he subdued all evil spirits and bound them under oath, so that they would protect the Buddhist teachings. After Padmasambhava arrived in Tibet, the building of the Spontaneously Arisen Temple of Samye was completed within five years. At the Cave of Chimphu, he initiated eight disciples,

headed by King Trisong Detsen, into the mandala of the peaceful and wrathful Buddhas, and bestowed upon them the complete teachings on the various stages of the Vajrayana path. Most of his teachings were written down by Yeshe Tsogyal or himself and miraculously concealed as innumerable “spiritual treasures”

(gTer ma) in various places–temple buildings, sacred images, rocks, lakes and even the sky. He entrusted each of them to a particular disciple and prophesied that they would be reborn in the future as Tertöns, or treasure-finders, and take these teachings out of their place of concealment to benefit beings of that particular time. When the right time comes,

a Tertön experiences visions or signs indicating how and where to discover his or her destined treasure or Terma. The Terma are usually in symbolic Dakini script, at the sight of which, the Tertön is able to write a whole volume of teachings. In the case of so-called “mind treasures,” the teachings are not physically unearthed but arise in the Tertön’s mind. Over the centuries,

a few hundred Tertön masters have appeared. Even in recent times Padmasambhava’s treasure teachings continued to be revealed, by great masters such as Dudjom Rinpoche and Dilgo Khyentse Rinpoche himself.

This mode of transmission, sometimes termed the “short” lineage, complements the “long” lineage of the canonical scriptures (bka’ ma), which have been transmitted without interruption from master to disciple,

from the primordial Buddha, Samantabhadra, through Guru Padmasambhava, Vimalamitra, and other great Awareness Holders. In a third stream of transmission, the pure visions (dag snang), Guru Padmasambhava
appears in reality to the Tertön and speaks to him in person. Under Guru Padmasambhava’s guidance, over a hundred learned Indian panditas and an equivalent number of Tibetan translators, or lotsawas,

translated into Tibetan the entire Buddhist Canon and most of the Indian commentaries. This period is known as that of the Early Translation, Ngagyur (snga ‘gyur). The upholders of the vast and rich spiritual tradition which flourished in its wake are known as the Ancient Ones,

or Nyingma (rnying ma). Although the monastic tradition was nearly eradicated during the persecution waged by King Langdarma, the Nyingma tradition survived in lineages of highly realized lay yogins. In the late tenth century, at a time where Buddhism was vanishing in India, a second wave of translation occurred,

spearheaded by the great translator Rinchen Sangpo (957-1055). The various lineages that sprang from it belong to the New Translation period (gsar ma). These include the traditions of the Kadam (and its later development, the Geluk), Sakya, Kagyu, Shangpa Kagyu, Chöd and Shije, Kalachakra, and Ugyen Nyendrub. These traditions, old and new, are often called the Eight Chariots of Spiritual Accomplishment (sgrub brgyud shing rta brgyad).

Guru Padmasambhava’s lineage maintains a complete tradition of both Sutra and Mantra, arranged into nine vehicles that incorporate all aspects of Buddhist theory and practice. Although all teachings and paths have but one goal, there are as many paths and vehicles to reach Buddhahood as there are different natures and capacities in sentient beings. This is why the Buddha and all the accomplished masters following him taught a variety of methods to suit varying needs. The Lankavatara Sutra says:

Guru Rinpoche – by Karina of Denmark

The Nyingma tradition distinguishes nine main vehicles for realization, or yanas. They do not represent separate, altogether different approaches: each of them is a step toward the next, which naturally includes the preceding ones.

Just as all rivers merge into one ocean, and as all paths lead to a single summit, so all vehicles ultimately fuse into one as they culminate in Buddhahood, the Radiant Vajra Heart (‘od gsal rdo rje snying po) of the Great Perfection (rdzogs chen). These nine vehicles can be condensed into three, the Hinayana, the Mahayana, and the Vajrayana.

The Hinayana path is based on renunciation. Its practice is motivated by the wish to liberate oneself. When considered on its own, it may be called “lesser vehicle”; when integrated into the whole path of the three vehicles,

it is regarded as the “basic vehicle.” The Mahayana practitioner is motivated by the altruistic intention to liberate others from suffering and bring them to Buddhahood. The Mahayana, or Great Vehicle, surpasses the Hinayana in many essential aspects. A Bodhisattva recognizes the lack of true existence of both the individual and of all phenomena. He thus regards everything as being like a dream or an illusion.

However, his understanding of absolute truth does not lead him to ignore relative truth: with loving-kindness and compassion, he keeps his actions in perfect accord with the karmic law of cause and effect. Vowing to attain enlightenment for the sake of others, he develops limitless compassion for all suffering beings and works tirelessly to benefit them. Yet his compassion is united with wisdom. Realizing the ultimate nature,

which is free from clinging, he rests in the great evenness of the non-dual absolute truth.
The Vajrayana path-is based on “pure perception” and is motivated by the aspiration to free swiftly oneself and others from delusion by practicing skillful means. The Mahayana chiefly considers that the Buddha nature is present in every sentient being like a seed, or potentiality. The Vajrayana considers that this nature is fully present as wisdom or pristine awareness,

The undeluded aspect and fundamental nature of the mind. Therefore, while the former vehicles are known as “causal vehicles,” the Vajrayana is known as the “resultant vehicle.” As it is said, “In the causal vehicles one recognizes the nature of mind as the cause of Buddhahood; in the resultant vehicle one regards the nature of mind as Buddhahood itself.” Since the “result” of the path, Buddhahood, is primordially present, one only needs to actualize it or divest it of its veils. The gateway to the Vajrayana is empowerment, or Abhiseka,

which is given by the spiritual master. It empowers one to practice the Vajrayana teachings and thus to achieve ordinary and supreme spiritual attainments. Guru Padmasambhava’s lineages were perpetuated by his twenty-five main disciples, his five spiritual consorts, the eighty siddhas of Yerpa, the hundred and eight great meditators of Chuwori, the thirty mantrikas of Yangzom, the fifty-five togdens or realized beings of Sheldrak, the twenty-five dakinis, the seven yoginis, and countless other disciples.

From them emerged many important spiritual streams, such as those initiated by Sopo Palkyi Yeshey, Zur Shakya Jungney, Nub Sangye Yeshe, and Nyak Jnana Kumara. Over the centuries many great luminaries such as Ronzom Mahapandita, Gyalwa Longchen Rabjam, Minling Terchen, Minling Lochen, and Jamgon Mipham appeared and elucidated the most profound aspects of Buddhist philosophy and practice. One Hundred major and a thousand minor Tertöns,

such as the five kingly Tertöns and the eleven Lingpas, revealed and transmitted most profound teachings appropriate to their times. The “seal” of all Tertöns is said to have been Jamyang Khyentse Wangpo (1820-1892). In one of his visions, he could clearly see all the termas that were hidden throughout Tibet and other countries.

He was the only master in Tibetan history to have not only received, but also transmitted the “seven transmissions” (bka’ babs bdun), that are the canonical teachings, treasures taken from the earth,

reconcealed treasures, mind treasures, recollections, pure visions, and aural transmissions received in visions.
With Jamgön Kongtrul Lodrö Thaye (1813-1899), Patrul Rinpoche (1808-1887) and Jamgon Mipham (1846-1912), Khyentse Wangpo was the main inspiration of the nonsectarian movement that flourished in the 19th century. He spent thirteen years traveling indefatigably all over Tibet to receive thousands of different traditions and lineages of Buddhist practice,

many them on the verge of extinction. He traveled modestly on foot with a pack on his back wearing out, so it is said, three pairs of boots. Having gathered these important teachings together, he and Jamgön Kongtrul edited, arranged and published them in several great collections.

Thus, these great teachers saved the heritage of Tibetan Buddhism from decline and restored its vitality. They passed on to future generations the living transmissions, without which the texts would have retained only a symbolic value.

At the age of forty, Jamyang Khyentse Wangpo went into retreat for the rest of his life, never emerging from his hermitage until his parinirvana at the age of seventy-tihree. His reincarnation Dilgo Khyentse Rinpoche revealed many Dharma Treasures known as New Treasures and was an adherent of the RIME nonsectarian tradition which practiced without bias in all the traditions of Tibetan Buddhism. During his lifetime of Eighty-one years he accomplished innumerable activities such as retreat, teaching, construction of monasteries,

providing teaching and substenance for great lamas such as H.H. The Dalai Lama, many young future lineage holders, the King of Bhutan and the royal family and was known to them as their root teacher, he preserved many texts from destuction and obscurity, without his efforts most of these texts would have been lost.He visited Tibet and revitalized the Dharma at. many monasteries in Tibet during a time of darkness. Many Tibetans said that Dilgo Khyentse was the kindest lama of this century in Tibet. 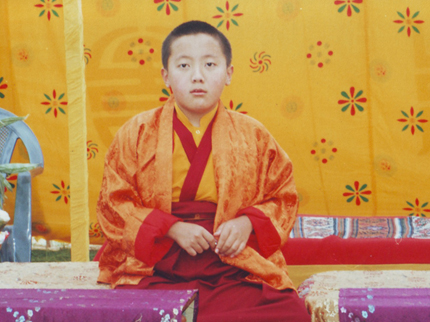 Currently his reincarnation is Urgyen Jigme Yangsi. We pray that his life is long and as magnificent and as full of beneficial qualites as before. Whoever follows such a great lama as their guide has a good opportunity to serve the activity of the Dharma and extend the life of the Doctrine. This is truly beneficial for all sentient beings. H.H. Dilgo Khyentse Yangsi Rinpoche